When the COVID-19 pandemic hit, BreAnna Monk worried about all the members who had quit coming to the Derby Senior Center for exercise, games and socializing as this highly vulnerable population hunkered down.

“The beauty of the center has been to keep these seniors active,” said Monk, who for the past five years has been the center’s senior services and transportation director.

Nearly 11,000 senior centers in America serve 1 million older adults every day, according to the National Council on Aging, and research shows that senior center participants have higher levels of health, social interaction and life satisfaction. 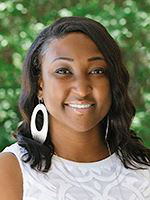 Before the pandemic, as many as 400 seniors a day would visit the center in Derby, where about 14% of the nearly 25,000 residents are 65 and older. Center membership is open to individuals 55 and older and their spouses.

The center reopened in mid-June, but only about 10% of the members returned. Others were struggling.

“It broke my heart that we couldn’t give them what they needed,” Monk said. “Some were calling us in tears.”

Seniors figured prominently in many projects, but those tended to focus on their fragility through home-delivery services or “care packages” sent to nursing homes. Monk and others – including Phil Black in Salina and leaders of the John M. West American Legion Post 408 in Derby – turned that notion on its head with initiatives to keep seniors active and engaged.

For the Legion post, that meant finding ways for its members to keep participating in post events, accomplishing the dual outcomes of keeping seniors occupied while retaining the volunteer base for such efforts as recent food drives to help Derby and nearby Haysville. Both cities are south of Wichita in Sedgwick County.

Black, too, had dual outcomes in mind with his project to continue a small weekly dinner club of seniors called the Friday Night Follies. His goal was to maintain the social interaction provided through the club and give local restaurants an economic boost.

As part of the Derby Senior Center’s Operation Engage, staff prepared 100 packages that contained some of the usual pandemic items, such as masks and sanitizer. Not so usual were 2-pound weights and exercise bands.

Robocalls notified members that the packages were available on a first-come, first-serve basis and could be picked up or delivered.

The center received a Kansas Beats the Virus grant, and Monk said, “That money has truly been a godsend.”

Exercise videos created by the center’s fitness instructors will also be available on YouTube and at scheduled times on Channel 7, the local government TV channel that airs City Council meetings.

“I want them to be focused on staying physically active. I would like as an outcome for them to get up, move and not be stationary,” Monk said. “If we can keep them engaged in their home, that will be half the battle.

“I have a senior who while we were closed, her daughter called and said her mother’s mental health was declining.  When we opened, that member was one of the first through the door, and we saw a difference when she was able to come back.”

Operation Engage truly came from the bottom up. Center staff launched it based on the recommendations of its members.  “We decided we could take some of the senior center activities to them,” Monk said.

Like Monk, Black faced declining participation in the dinner club.

Though the transition to Zoom proved to be a lifeline for some, others found it a poor substitute for in-person gatherings or simply didn’t have the dexterity to hold a smartphone for an extended period. Home-cooked meals also meant the dinner club was not supporting local restaurants at a crucial time, as business plummeted during the pandemic.

Black’s artful – and cost-effective – solution turned out to be $25 phone tripods and $25 restaurant gift cards for carryout.

Continuing to help others

Last month, American Legion Post 408 officially cut the ribbon on its new home, the former administrative building for Derby Public Schools. But bricks and mortar are not the foundation of the post.

“Our volunteers are our most important asset, so we want to keep each of them safe,” said Mike Saindon, who handles the post’s public relations and is the father, brother and grandson of U.S. military veterans. “We have to take care of our people, and that will flow out to the public.” 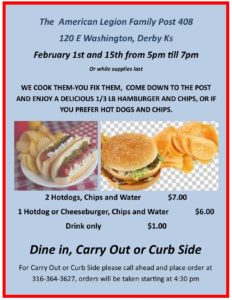 American Legion Post 408 in Derby has added a drive-through option to its Burger Burn fundraiser.

That is no small task.

Post Commander Bryan Page said that, with nearly 400 members, the post is one of the most active among the approximately 270 Legion posts around the state. It hosts as many as 40 events during a normal year, and proceeds from the events provide vital revenue.

Moving events outdoors seemed to be a good solution, and one that would allow for even some of the oldest and most vulnerable veterans to keep volunteering. But this is Kansas, after all, and protecting volunteers from COVID while exposing them to frostbite didn’t seem like a good trade-off. The post’s Burger Burn is scheduled for two Mondays in February.

Here again, with the help of a Kansas Beats the Virus grant, the post hit upon a simple, affordable answer that will allow for drive-through events. It purchased portable heaters, food warmers, sanitizing equipment, masks and gloves for volunteers, and digital thermometers for temperature checks.

While the post’s members might have gotten used to putting themselves in harm’s way while serving in the military, that’s not what Page wants for his post now. Plus, he wants the post’s youth initiatives, such as fielding a baseball team and teaching flag etiquette, to continue.

“We want to keep making things happen for our membership and for younger generations to feel that they can safely socialize.”

Amy Geiszler-Jones is an award-winning freelance writer based in Wichita, with a background in writing about military matters, higher education, finance, medicine, the arts and other topics.