Who would’ve guessed that giving away money would be difficult during the pandemic?

Certainly not Julie Turnipseed, but that was exactly the quandary she faced when her Garnett-based agency wanted to help residents battle COVID-19.

She is executive director of the Anderson County Development Agency, one of hundreds of organizations around the state that participated in Kansas Beats the Virus, a Kansas Leadership Center and the state of Kansas.

The money giveaway – which got hung up on the best way to disperse the cash – was part of a contest the agency sponsored to encourage mask wearing.

And as anyone who has looked at TV or streaming options lately knows, Americans love contests. So, many Kansas Beats the Virus participants looked to capture that spirit of competition in promoting adherence to safety guidelines aimed at stopping the spread of COVID.

Contests proved to be popular approaches to addressing some of the most pressing needs identified in the Kansas Beats the Virus campaign, including encouraging mask wearing and addressing mental health issues brought on by the pandemic. 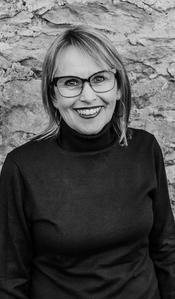 In Turnipseed’s case, her agency wanted an inclusive and visual campaign. The effort got a boost as a grantee through Kansas Beats the Virus, which distributed approximately $850,000 in implementation grants. The Kansas Health Foundation added funds near the end of the campaign so that more local ideas could get financial assistance.

The Anderson County agency used part of its grant money to pay for the creation of an Anderson County Cares logo. The contest called for residents to take selfies of themselves around town wearing specially produced masks with the logo on them. Other funding from the grant paid for the $10 money order contestants received when they presented their posted selfie at City Hall.

The Kansas Beats the Virus campaign convened approximately 850 meetings throughout the state in December.

The convenings spurred dozens of creative ways grassroots groups could encourage healthy habits during the pandemic. But if there was one overriding theme that emerged from the projects it was that flexibility and creativity were musts when moving from the drawing board to implementation.

In Anderson County, part of the challenge was overcoming a black eye that garnered national media attention in the summer. Around the Fourth of July, the Anderson County Review published a cartoon on its Facebook page that likened Gov. Laura Kelly’s mask mandate to Nazi tactics during the Holocaust. The publisher, a local Republican leader, later apologized and removed the cartoon.

In facing the challenge of handling monetary transactions, the Anderson County Development Agency was not alone among other Kansas Beats the Virus grantees. Groups that delivered groceries also grappled with payment methods.

The development agency’s first idea was to give out gift cards, but Turnipseed found that the local Dollar General didn’t sell them in denominations of 10. The other drawback was that the store only carried cards for national chains, and she wanted to support local businesses.

They couldn’t give out cash, because as a city institution, “that is an auditor’s nightmare,” she said. Money orders seemed out of the question until Patriot’s Bank offered to waive its normal fee and do the work for free.

The city will be giving 200 away over the two weeks of the contest. If all the money orders aren’t distributed during that time, they will hand them out to shoppers at a local grocery store.

“Wearing a mask means caring about yourself and others you come in contact with, and we do have a caring community,” Turnipseed said. “We are also having fun with it; we wanted to keep it light and fun and interesting and all that rolled into this campaign.”

For Crosswinds Counseling and Wellness in Emporia, getting the message out about stopping the spread of COVID-19 hit home.

“We really think it would be hard for anyone to say they had not had some kind of mental health impact,” said CEO Amanda Cunningham. “Anxiety, depression, withdrawal from dealing with the pandemic … the longer it goes on, the more impactful it will be.” 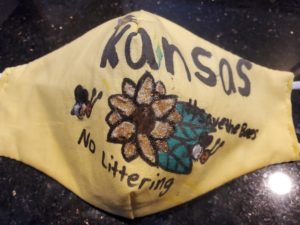 The group created a mask-wearing contest after their local chamber of commerce hosted its Kansas Beats the Virus meeting. Cunningham wanted to use the organization’s voice to get the word out about the importance of stopping the spread – and to do it quickly to a broad audience.

Crosswinds started the campaign internally. Staff decorated masks, took photos, and then posted them on Facebook as a role model to the community. Cunningham wanted to show they were all in on the concept that masks can help reduce the spread of COVID-19.

“We hire a lot of people, we want to be a good community partner and we try to educate the community as much as possible,” Cunningham said.

They offered a $100 cash prize to the best staff mask and opened the contest to the community. It will be open for two weeks and, at the end, the person chosen to have the best mask will also receive $100. 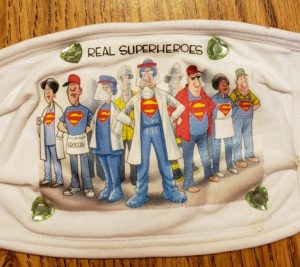 “Our social media outreach has progressed, and people pay attention to what we post, so even if they just see the page and know we are supporting it and believing it, we hope that it will influence them even if they don’t decorate a mask and take a photo,” she said.

If anyone knows how to get the word out about an event, it’s Teri Mott, the director of marketing and communication for Wichita Festivals Inc. Each year, her organization puts together the city’s musical extravaganza, Riverfest.

The pandemic forced last year’s Riverfest to be virtual. Mott and colleagues are acutely aware that the musical and artistic community has taken a hit during the pandemic, particularly those who make a living performing.

Wichita Festivals is sponsoring a contest where musicians compose and make a video of an original song celebrating the community’s fight against the virus. Submissions can be made via the festival website through April 2.

Entries will be judged by a Riverfest panel and the top four artists will each receive $500. One of those four will be selected by the public to perform the chosen song at a future Riverfest event.

“An anthem of encouragement is what we are hoping to inspire,” Mott said. “We want to make people feel better and we feel like we are the folks that can do it. We are good at communicating with people and reminding them of good times and planning for better ones.”

Tammy Worth is a healthcare journalist based in Blue Springs, Missouri.