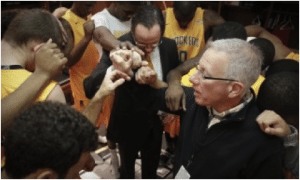 Editor’s note: A version of this story will appear in the next issue of The Journal, which will be published later this spring.

As the Wichita State University men’s basketball team made history this season, you could find Steve Dickie standing back on the sidelines and watching the team run plays in practice.

He isn’t there to offer pointers or to pontificate. As the team’s character coach, sometimes the most important thing he offers is simply his presence.

Dickie has attended almost every Shocker practice during their undefeated regular season and Missouri Valley Conference Tournament Championship run. At every home game, he’s been there, too, occasionally in a front-row arena seat but more often standing behind the team’s bench. Dickie also goes on the road with the Shockers, which he says can provide some of the best “hangout time” with the team.

The players seek Dickie out when they want advice or counsel, via text as often as in person.

“It’s not a token thing,” Dickie says. “We invest in who the guys are on the inside.”

In Dickie’s view, teaching character is teaching leadership. Dickie often speaks about self-leadership, similar to the Kansas Leadership Center’s concept of managing self. He believes that leadership is 10 percent skills and 90 percent character. To illustrate the concept, he draws an iceberg; character is the great mass below the surface.

Character is king to Gregg Marshall, the WSU head coach. Marshall recruits on character, but he also wants to make sure his players strengthen their moral and ethical foundations while at Wichita State. Enter Dickie, whose role as the team’s character coach is an unpaid volunteer post.

“They [the players] like and respect him a great deal,” Marshall says. “He’s very genuine. He doesn’t have an agenda at all.”

Marshall met Dickie, formerly associate pastor at Wichita’s Eastminster Presbyterian Church, early in his tenure with the Shockers, and Dickie became a confidante of Marshall’s.

“I was his positive voice,” Dickie says.

Dickie is now in his third season with the team. He also serves as chaplain, leading prayers before and after games. That chaplain role is often the most visible to outsiders, but it is actually only a small portion of what Dickie does for the team. Dickie formally teaches leadership principles to the players in what he calls character sessions.

Every week or two, the team gathers for a character session. Dickie tries to make his lessons visual, using drawings or video clips where he can. Oftentimes, he threads together a series of stories to make his point. Recent sessions have focused on such concepts as service, fortitude, integrity and thankfulness. 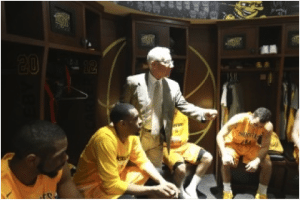 At the beginning of the season, Marshall asks the players to set personal, athletic and academic goals. But Dickie took that a step further this year. He asked the players to go home and mull over their goals. Dickie wanted them to distill those goals to one word, and he wanted that choice to be deliberate, not off the cuff.

So when the team gathered again to talk about goals, each player wrote his word on a piece of cardboard and showed it to the team.

“It was pretty moving,” Marshall says.

For Devon Smith, WSU’s manager of player development, that moment stood out because Dickie found a way to get often-guarded young men to open up in front of their peers.

Smith says Marshall also has used that word power session as a motivator, calling players out when they aren’t showing their word in their actions on the court.

“Gregg and I play off each other very well,” Dickie says. 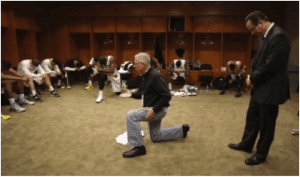 Dickie comes across as caring, committed and sincere. Players and staff unfailingly mention his positivity.

And in the high-pressure life of a college athlete – especially on a team receiving national scrutiny – it is nice to have someone in your corner whose primary focus is your performance as a human being, not your performance on the court.

“He’s definitely one of those guys you can lean on and put your trust in,” senior Lufile says.

“He’s so positive all the time,” VanVleet says. “I will carry things from him for the rest of my life.”

Dickie says the players like to kid about his “Dickie-isms,” but he believes the mantras he teaches help ingrain and embed his leadership lessons.

“They have been handed something, and it’s a responsibility,” says Dickie, who has a history with student ministry and a passion for athletics.

This year, the theme for the team is “better together.” Dickie rattles off the mantra: “Good, better best. Never let it rest. Let your good be better and your better, best.”

All the talk of encouragement may seem surprising given that the Shockers are known for their motto of “play angry.” But that concept is more applicable to the intensity that the players show on the court. Dickie and other staff members aim to foster a constructive environment.

Dickie isn’t the only “character coach” out there, and he has become friendly with his counterparts at other Kansas universities and beyond.

“It’s becoming bigger and bigger because character matters,” he says.

Dickie, who has been in ministry for 34 years, recently took on a role consulting with Nations of Coaches, a faith-based nonprofit that provides support for coaches across the country as they mold their athletes. It’s a position that allows Dickie to be fully present for the Shockers as character coach, or as he sometimes calls it, “team dad.”

“What’s on the inside matters,” Dickie says. “I believe we’re transformed from the inside out.” 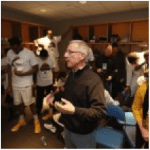 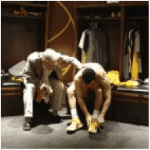 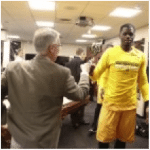 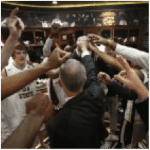