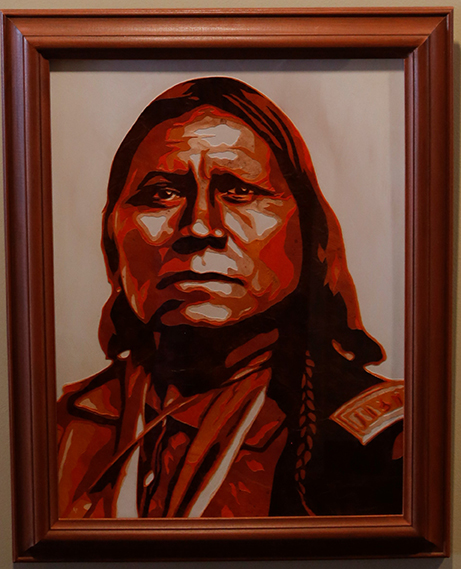 In 1867, Satanta was nicknamed the “Orator of the Plains” by U.S. soldiers and reporters at the Medicine Lodge Peace Treaty.

By then, he was notorious for his strategic raids against the U.S. military and white settlements.

In 1864, when a government physician visited the southern plains to vaccinate Indians against smallpox, he stayed in Satanta’s village for four days. He reported Satanta had a brass French horn, which he blew vigorously.

A few months later, when the Army sent troops to punish the Kiowas for raids against white settlers at what became known as the First Battle of Adobe Walls in Texas, it was reported that as the Kiowa and Comanche fought the troops, there was confusion among the soldiers because a bugler kept sounding advance when a retreat had been ordered.

It was Satanta blowing his horn. He had learned to mimic the cavalry’s bugle calls.

Satanta led his people at a time when there was great conflict on the Great Plains. He saw the prairie torn up before his eyes and the mass extermination of wildlife. He saw his people moved to reservations and it angered him.

“When I go up to the river I see camps of soldiers on its banks. These soldiers cut down my timber, they kill my buffalo and when I see that, my heart feels like bursting.”