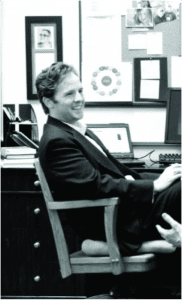 I didn’t sleep well last night. The weight of the decision is heavy.

I assume another man – the accused – didn’t sleep well either. For that matter, nor his family and friends, nor the other 11 members of the jury.

I dreamt about the case each of the last several nights. A murder trial has a way of sticking with you even outside of the courtroom.

It was nine days ago when I cheerfully walked into the courthouse to serve my civic duty. I would have thought you a fool if you told me the next nine days would be days seared into my memory.

People talk about jury service in terms of civic duty and responsibility. From now on I’ll talk about it as tough decision making too.

Making decisions may be an undervalued art in this interesting and quaint world of leadership development in which I live. We help people diagnose a situation, engage others, speak from the heart, manage emotions, challenge the norms, hold to purpose and so on. But all of that is weak if someone struggles to decide yes or no, now or later, guilty or not guilty.

It’s a complicated case. I’ve found myself longing for a simple case of bad guy hurts good guy. This is a case full of bad guys hurting each other. It’s not cut and dry.

Isn’t life, and therefore leadership, like that too? Everything is a shade of grey. Truth is a fantasy. Leadership must be something about navigating the many truths out there and finding a way to help people move forward. The jury heard lots of versions of the truth. I believe that someone who honestly believes it to be the truth told each version. It’s up to us to sit in judgment.

We have to decide guilty or not guilty. We are not advisors. We are not consultants. We have to make the decision – each one of us personally and then the group collectively.

The moment before I shared my opinion with my fellow jurors felt familiar. It was as if I were back in the Kansas House of Representatives, about to vote on a controversial matter, looking at the red and green buttons on my desk. Red meant no. Green meant yes. Green or red. Yes or no.

There comes a time in most situations where, if you intend to lead, you must make decisions. You might not have all the facts. You rarely will be fully comfortable. You usually can’t be certain that you’re 100 percent right and zero percent wrong. Decisions on tough matters are usually more like 70-30 or 60-40.

My observation is a few of our jurors are struggling under the pressure of it all. They are frozen. Unable to agree with the vast majority, but also unable to present a clear line of logic to suggest the majority change its mind. This is heavy work and they are entitled to take as much time as they need.

But my sense is they are struggling with the same thing that haunts so many people in so many situations that require leadership – coming to grip with the reality of their decisions and the consequences for all involved.

Editor’s note: Ed O’Malley recently served on the jury for a murder trial in Sedgwick County. He wrote this column just hours before he and his fellow jurors reached a verdict in the case. A version of this article appears in the Winter 2014 edition of The Journal.