Bridge Over the River Kaw 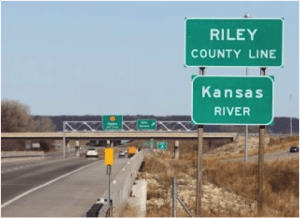 At least once a week, I drive on a brand new, state-of-the-art four-lane highway on my way from Manhattan to Wichita and back. Two separate bridges spanning the Kaw, roundabouts on the exits, retaining walls embedded with K-State Powercats, all the bells and whistles a guy could ever hope to expect from his infrastructure.

For the better part of four years, I’ve maneuvered through the traffic cones and waited patiently in bumper-to-bumper Fort Riley rush hour traffic as it’s been constructed. This improvement of Kansas Highway 18 from Interstate 70 to Manhattan was finally completed just before the holidays.

Because of the way my mind works, I travel upstream to the headwaters of the first idea and then float down the river with the community conversations, the politics, and ensuing machinations.

At some point, the person with the original idea probably thought this’ll be easy, everyone sees the need, right?

Feasibility studies. Planning. We don’t need a freeway, just traffic lights. Environmental impact reports. Designing. Bid-letting. You can’t take my farmland. Eminent domain. Earth moving. My God, they leveled an entire Flint Hill. Construction. And somewhere along the way, the one component that drives it all – an appropriation.

Our tax dollars at work. For the good of the many.

For the common good.

I think about the heat that was raised, the selves that were managed, the losses sustained, the others who were energized and the eventual consensuses (consensi?) reached. In Manhattan, Junction City, Topeka and Washington, D.C.

Seems to me building and improving highways is one of the things government does best. Probably because it’s one of the most concrete (forgive me) examples of working for the common good.

Driving over a brand new bridge is a much more visible illustration of problem solving than, say, any long-term solution to ensure children can escape poverty.

I think of the factions involved in solving this particular problem: the local communities, area businesses,

K-State, federal and state government bureaucracies, the Pentagon, the state legislature, the U.S. Congress, the impacted landowners and what they each gave and took.

And then I think of my fellow motorists, whom I suspect are not thinking about any of this stuff, which, in the scheme of things, is kinda the way it’s supposed to work. Consumers of infrastructure tend to take it for granted.

Efforts like this that result in end products like new freeways are not for the faint of heart. Sometimes they seem like thankless jobs. And lately, it seems they’re more thankless than they used to be.

From where I sit, behind the wheel of the charcoal gray Ford Escape, easing down a brand new four-lane highway on a bridge over the largest river in Kansas, I’m grateful they did. 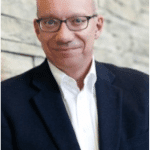 Mike Matson is the Vice President of Innovative & Strategic Communication at the Kansas Leadership Center.