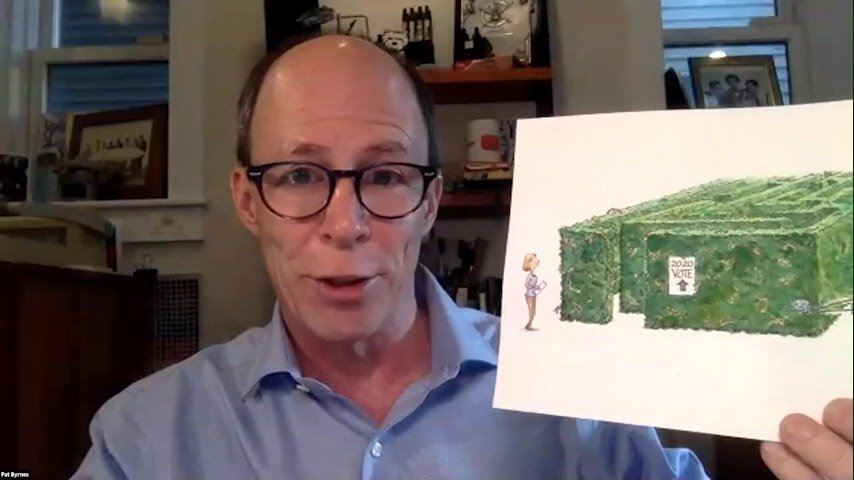 The virtual launch event for the 2020 Fall Edition of the Kansas Leadership Center’s Journal magazine focused on voting and civic leadership in one of the most unusual elections in living memory. The magazine itself features a pandemic voters’ guide and in-depth stories on the top election issues chosen by readers – COVID-19, health care, the economy and criminal justice. It answers questions about voting, including what to do when your Plan A goes awry.

Kicking things off, New Yorker magazine and Your Leadership Edge illustrator Pat Byrnes shared his latest Journal cartoons depicting the elections as a life-threatening obstacle course. Asked what he hoped people would take away from his illustration, Byrnes reflected:

“I would hope that by seeing the thoroughness and ridiculousness of that, they would feel less alone. One of the things about this pandemic is that we’re shut off in our communication. And that isolation is not good. And so, in a visual, lighthearted way. . . making a connection between people and saying, ‘Oh, someone else feels what I feel.’ That kind of empathy is . . . Lord knows that’s what we all need more of these days.”

Journal writers on Voting and Peaceful Demonstrations in Kansas

We heard from Journal contributors who commented on their articles and offered reasons for hope in Kansas. Shawnee’s Jerry LaMartina, who wrote our voting primer, affirmed that despite concerns that the pandemic would cause confusion, uncertainty and distrust in voting, election officials in Kansas reported that so far, early voting in Kansas is “going very well. Really no problems worth mentioning.”

Correspondent Jill Way made her Journal debut with a story from her new hometown in Liberal, KS. When supporters of President Trump confronted Black Lives Matter protesters there last month, Jill had a front row seat.

Asked what kept the tension from escalating into open conflict, Jill pointed to the city’s unusual diversity in Kansas (62% of Liberal’s population is Hispanic or Latino, 28% are non-Hispanic Whites and 6% are Black), which she believes has increased tolerance for divergent viewpoints. “People . . .  just wanted to make their voices heard. Once they got their points across, they would kind of move along,” Way said.

The other factor she cited was the strong, protective presence of the police, who kept the peace without intervening and set the tone for a peaceful exchange of views. “I know that some of the Black Lives Matter activists said that they were grateful to have their presence there. So I have to give them some credit for their planning and preparation and keeping calm at that event.”

For outside perspective on the elections, we spoke with expert political commentators, including Bob Beatty of Washburn University, Patrick Miller of the University of Kansas, Michael Smith of Emporia State University, and KAKE-TV Senior Reporter Pilar Pedraza. They outlined and commented on three scenarios for election night:

Patrick Miller addressed the deeper roots of our current political polarization. By turns chilling and inspiring, he sounded a sober note on the fragility of democracy and the possibility of political violence, yet exhorted Kansans to trust the election results and take responsibility for the necessary “discomfort of democracy.”

“Democracy is supposed to make you uncomfortable; it is supposed to challenge your views. And that really runs counter to how most of us function politically, where we have relatively few people that we engage with politically — people who already agree with us. We create our own echo chambers in our social lives, to the point where we believe that it’s impossible that a majority of society might disagree with us in any way whatsoever. I think that’s unhealthy.

Following these presentations, small group discussion focused on the distinction between voting and political activism, on the one hand, and civic leadership on the other. Kansas Leadership Center President and CEO Ed O’Malley challenged us with Benjamin Franklin’s famous admonition to a new-born United States, that the Constitution had created “a republic, if you can keep it.”  He asked participants to consider what we ourselves can do to exercise civic leadership and strengthen our republic in these divided times. What emerged from discussion was a mix of specific behaviors and the outline of a mindset.

Finally, Ed closed the event with reflections inspired by the comments of participants:

“We need enough people whose purpose is more about the ‘civic container’ [of our republic] than it is about [the outcome of] this specific election. Maybe keeping a republic means more people whose purpose is strengthening the container of our democracy more than it is winning the day. The government [of this country] was created to preserve our rights and our ability to live the life we want to live and pursue the happiness we want to pursue. Remembering that, and thinking about that, and planning for that, and plotting for that, and having enough purpose in your heart for the container that is American civic life, [so] that you are thinking now about ‘Who is doing the prayer at Rotary on Wednesday? What does it look like the next day when I show up? How do I prepare myself to show up either way?’ Know that the opportunity to exercise leadership – the opportunity to strengthen the civic fabric – is still there for you as an individual.”

What will you do to affirm our republic, before, during and after the election?