Listening to Nebraska on the Heartland Together Tour

To learn how to better support thriving local businesses in rural communities, the Kansas Leadership Center (KLC) launched a two-week listening tour in Kansas, Iowa, Missouri and Nebraska. It’s the opening phase of ‘Heartland Together,’ a partnership with the Ewing Marion Kauffman Foundation (EMKF) to generate leadership for rural entrepreneurship in these four Midwestern states. KLC’s Julia Fabris McBride and Alejandro Arias-Esparza spent a week in Nebraska. After many conversations and miles on the road, Julia sat down to record and sift through her reflections on what these communities need and how KLC can help.

At six am on a Monday morning in late March, KLC civic engagement manager Alejandro Arias-Esparza and I headed north from Wichita on I-135. By the time I dragged my suitcase back up the stairs to my College Hill apartment just before midnight the following Friday we’d covered 1500 sandy, sometimes bleak and more often sweetly beautiful miles of rural Nebraska. Our purpose: Find out what’s going well and engage residents in a conversation about what makes it hard for rural communities in the Heartland to sustain strong support structures for locally grown businesses.

In each of six Great Plains towns we listened as hard-driving people coaxed one another to celebrate wins, name what makes their work difficult, and speak bold aspirations for their community. Along the way Alejandro and I kept eyes and ears wide open for moments to honor voices that may not always be the loudest but yearn to belong. 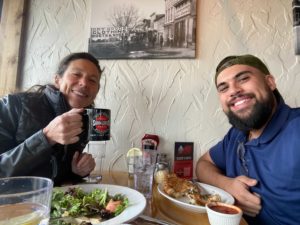 First stop, Sidney, Nebraska, population 9,600. Just 90 minutes from Cheyenne, Wyoming, and two and a half hours from Denver. We took a few minutes tooling around this small-town oasis to find a local spot for a late lunch. Then, at our meeting room at the community college annex on the edge of town, Alejandro and I scrambled to add chairs and pass out extra materials as an overflow crowd of 19 streamed in. People dreamed out loud about maintaining Sidney as a comfortable, welcoming place for young people to raise their families and take advantage of top-quality schools. We heard concerns from main street businesses and managers of mid-size factories. The pressing need for good, affordable housing stood out loud and clear. 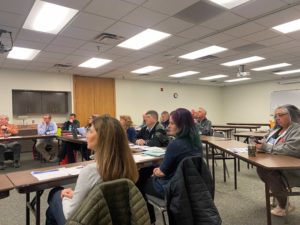 In a seat up front we recognized Melissa Norgaard who along with her husband Stan owns the Sam and Louie’s Italian Restaurant and Boss City Brewery where we’d stopped at for lunch. (Alejandro had the calzone and I sampled the first of many Cobb salads with chicken.) Exhausted from two years of worrying about how to keep the doors open amidst Covid restrictions and staffing shortages, Melissa was nonetheless eager to lend her voice and effort to create a bright future for her rural community. One person after another congratulated our host Sarah Sinnet, local economic development director and a zealous community volunteer, on her role in achieving their goal of $700,000 to upgrade the city park. The goal of the project: Make Legion Park inviting and accessible to all including people with disabilities. 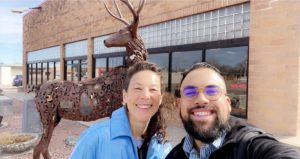 Next morning, we drove east 70 miles to Ogallala, Nebraska, population approximately 8000 (depending on who you ask) where, over boxed lunches provided by the Keith County Community Foundation, locals again described aspirations for a “small and thriving” community. They want to keep Ogallala “right-sized, and “a haven for those who don’t want to live in Fort Collins anymore.” 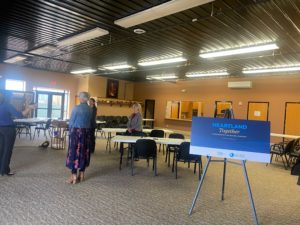 Leanora, an immigrant from Central America spoke passionately about the sense of safety and opportunity she’s achieved in Ogallala, wishing and hoping that more of her neighbors would embrace her attitude of gratitude and optimistic “I love where I live!” perspective.

City council members, a nonprofit executive who is renovating a historical building for a brewery, boutique and restaurant owners, the proprietor of a gas station and convenience store, a custom bike shop owner, economic development director, and elected officials these are but a few of the roles represented as we proceeded town to town.

Next stop, McCook in central Nebraska. Population 10,700. We met in the back room of Sehnert’s Bakery and Bieroc Cafe, a community institution since 1957 and a local business transition success story. Both Matt Sehnert (just retired from the bakery business) and Andrew Ambriz (the new owner of Sehnart’s) were in the room. 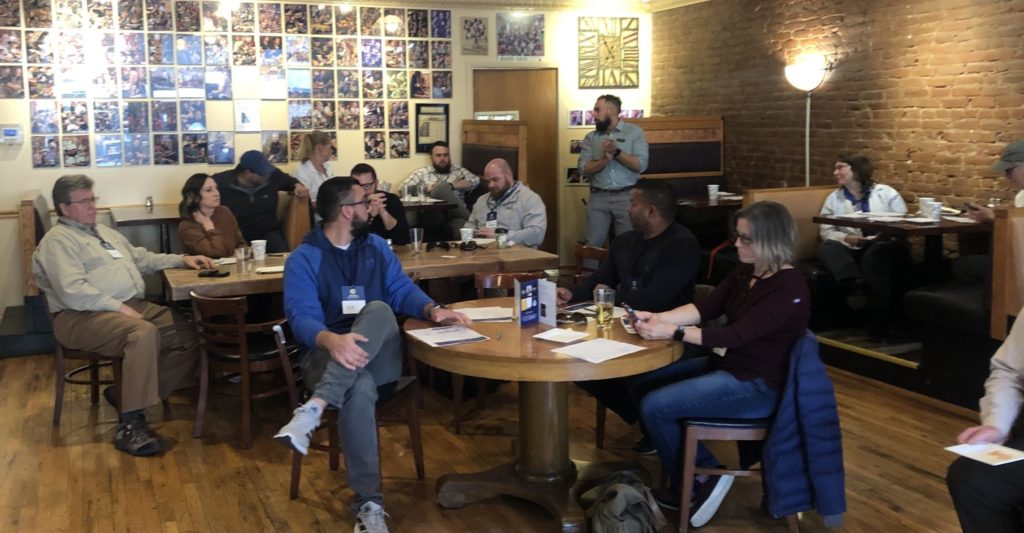 Transition was a theme. Can we have more successful transitions like the one Matt and Andrew negotiated? Who will take over the downtown businesses, replace the plumber, join the Chamber when those who’ve been filling those roles for decades decide to retire? Will the elders understand how much sacrifice is required by a younger person to make it work? Can the two find a way to honor and compensate the current business owner for all that they’ve invested and at the same time set the new owner up for success? What role can the community play in helping businesses thrive as one owner retires and another takes the reins? What kind of leadership will it take to create structures of support for this and other challenges? 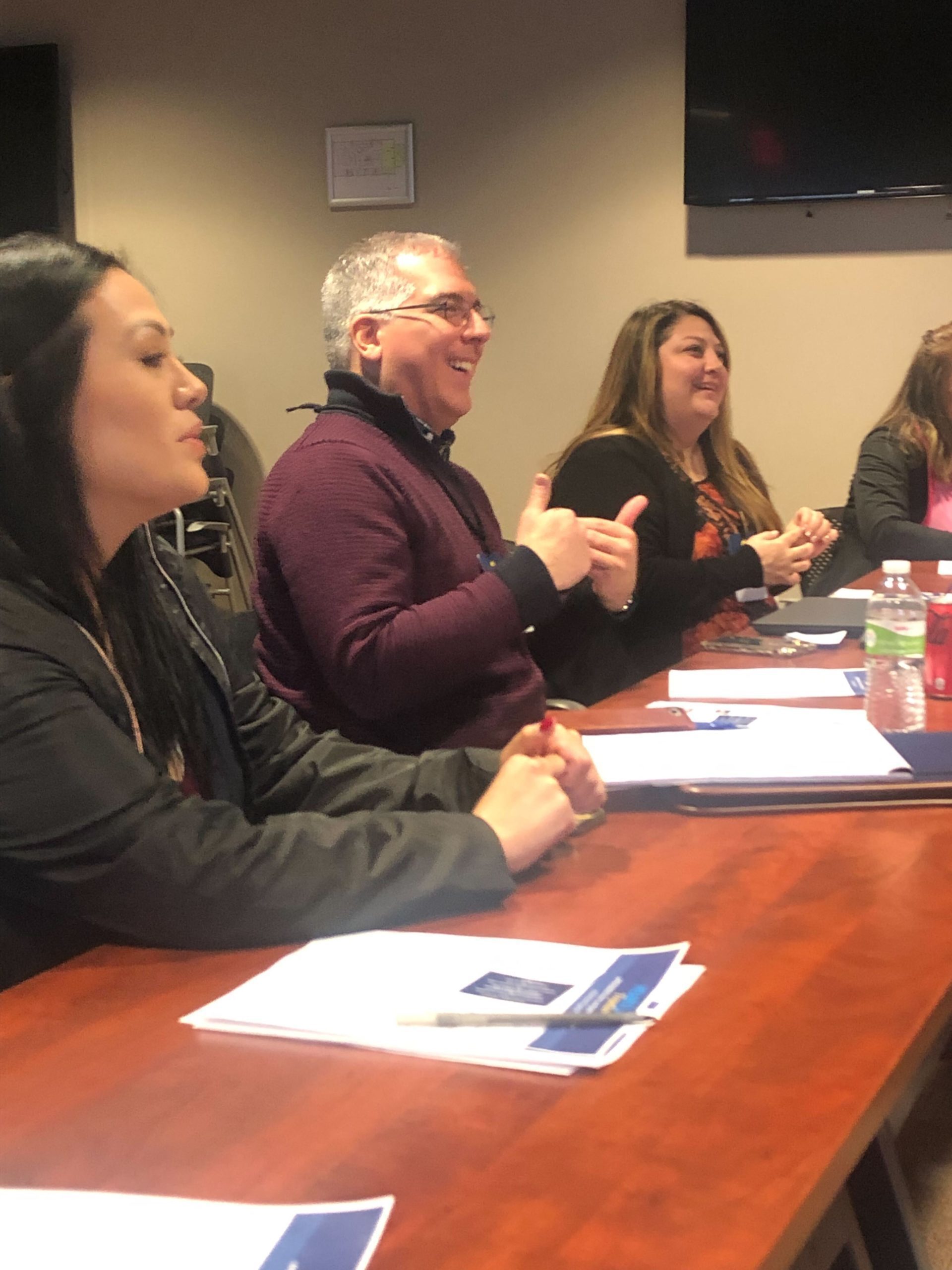 In two larger but still markedly rural and agriculture-based communities, Norfolk (population 25,000) and Grand Island (50,000), Alejandro facilitated the meetings in his native Spanish. Hosted by Juan Sandoval in Norfolk, and Sandra Barrera in Grand Island, I was able to understand just enough Spanish to follow the waves of emotion – if not every word – as we heard from current and aspiring business owners who’d arrived in Nebraska from Mexico, Cuba, Guatemala, and other points south of the border. Moms brought young children. Construction workers came straight from the job. And like their counterparts in other towns, all appeared overstretched but driven to contribute to a community where their families could thrive.  Spanish speakers spoke of dreams for “una comunidad unida” where there is no sense of “us” and “them,” simply opportunities and resources accessible to all. 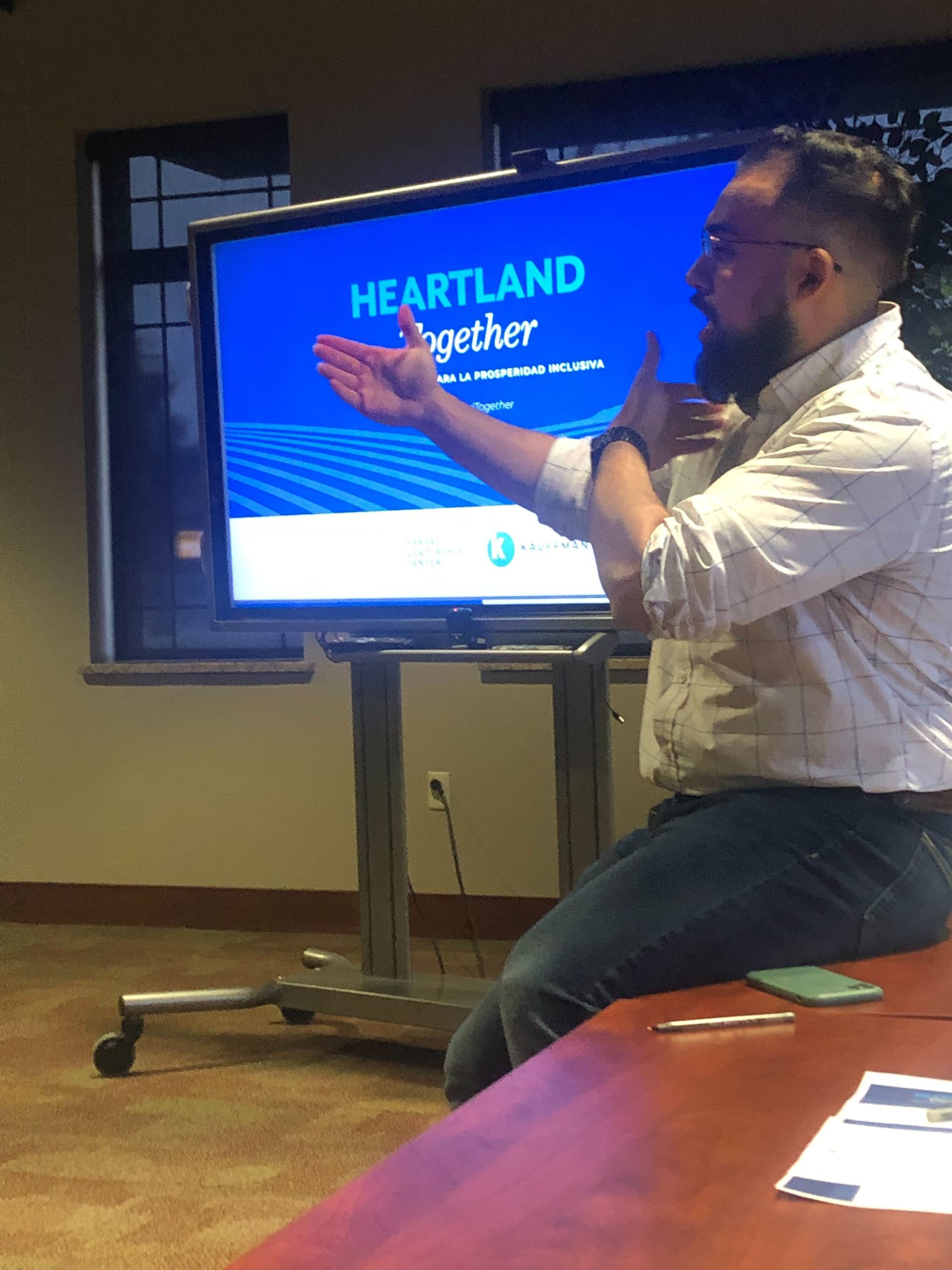 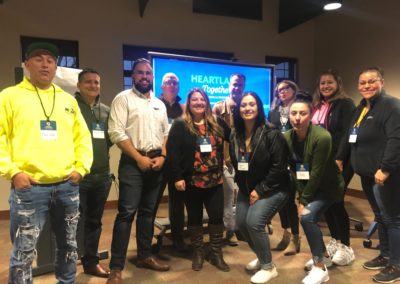 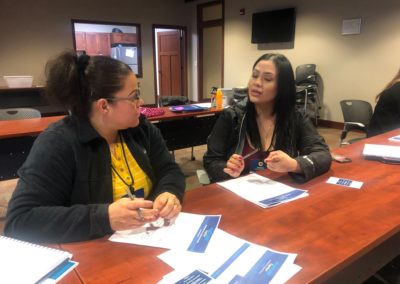 What can rural communities do to take advantage of the entrepreneurial energy of these ambitious recent immigrants? Translate materials, make sure aspiring business owners know about educational opportunities to help them succeed, and see that everyone receives timely announcements about grants and loans to support locally owned businesses.

What can rural communities do to take advantage of the entrepreneurial energy of these ambitious recent immigrants? Translate materials, make sure aspiring business owners know about educational opportunities to help them succeed, and see that everyone receives timely announcements about grants and loans to support locally owned businesses. 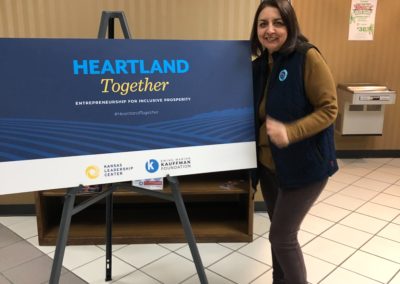 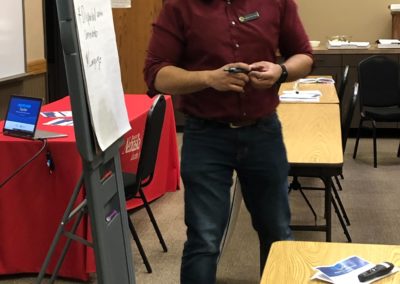 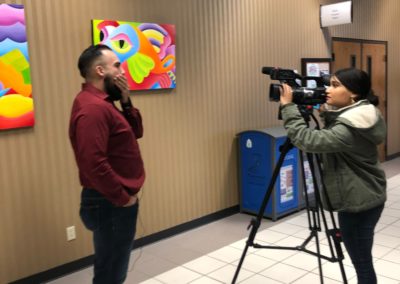 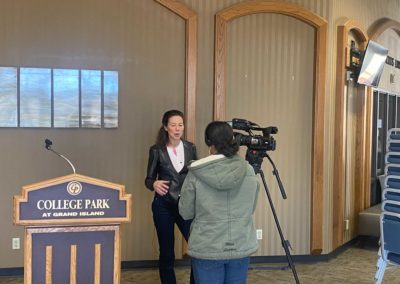 O’Neill, Nebraska, population 3500, seat of Holt County, and acknowledged “Irish Capital of Nebraska,” was the northernmost stop on our listening tour. Our hosts, a pair of passionate economic developers Steve Brewster (the Baby Boomer) and Shelby Regan (the Millennial) come at the challenges inherent in rural life from different vantage points. Yet it’s clear after five minutes of conversation over tacos at La Costeñita in O’Neill that both Steven and Shelby wake up every morning eager to weave connections among entrepreneurs in a county where cows outnumber people at least 10 to one. 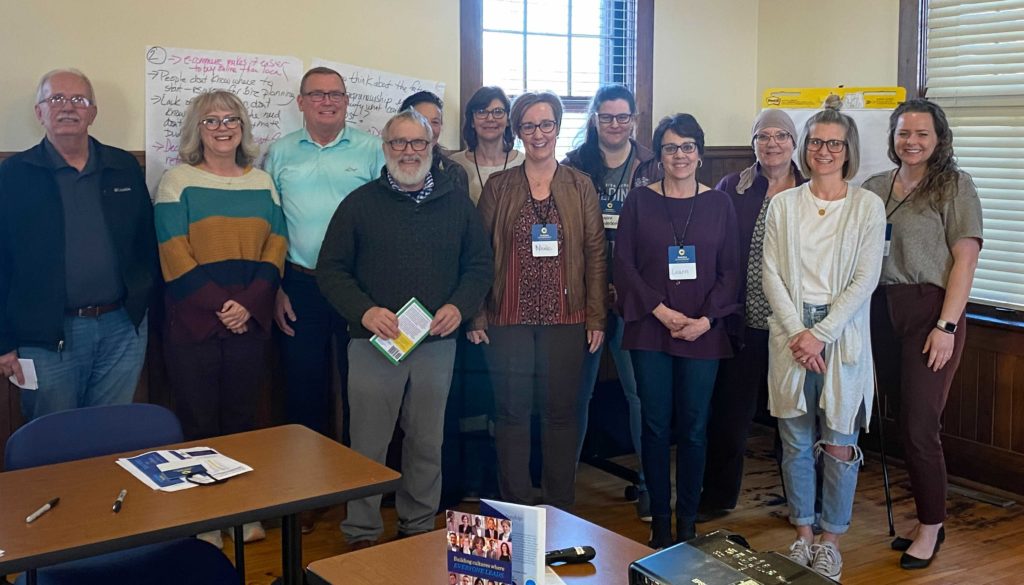 Like many of the rural Nebraskans Alejandro and I met during our week-long sojourn, Steve didn’t hesitate to spend 45 minutes in the car to be part of a conversation facilitated by a couple of Kansans. He sensed, as Alejandro and I do, that together we can bridge the gap between where we are now and our bold aspirations for entrepreneurship amidst a thriving rural Nebraska.

Over the coming weeks, we’ll be sharing listening tour reflections from our teams in Kansas, Iowa and Missouri. To learn more about the listening tour and the Heartland Together partnership with the Kauffman Foundation, visit our announcement.

Tough challenges are all around us.  They are in our professional lives, in our communities, and in our families. They polarize and perplex us. They can seem unsolvable, unreachable, and beyond our ability to grasp what needs to be done.  Our toughest challenges...

Leadership Principle #5: Leadership is about our toughest challenges

Leadership only happens if you need to mobilize other people to make progress on an important challenge. You have to care about something—an aspiration or a big concern. Without that clear sense of purpose, the effort won’t be worth the risk. It’s not leadership if...