Behind the story: Seeing Topeka through a new lens

Editor’s note: Read Sarah Caldwell Hancock’s community profile of Topeka and learn “9 Things Every Kansan – and Kansas Community – Can Learn From Topeka” in the Spring issue of The Journal. 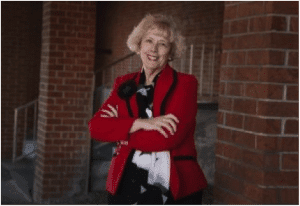 Nancy Johnson, executive director of the Community Resources Council, is an example of one Topekan who celebrates progress while also acknowledging tough realities.

I am a native Kansan, so when asked to write a piece about Topeka, I thought “No problem. I live in eastern Kansas, less than an hour away from Topeka. I can make a few calls and drive there and check it out. The story will practically write itself.”Then I reflected on how little I knew about our state’s Capitol: The western edge of Topeka is a mass of urban sprawl where people from my area go to shop at big-box retailers or eat at fast-casual restaurants. Topeka has a nice zoo and park where I took my sons a few times when they were little. The Kansas Museum of History is excellent, and my family has spent several two-hour periods there exploring the exhibits or taking in special demonstrations. I have visited the Capitol to educate myself and my children and to see the John Steuart Curry murals. I recalled thinking downtown looked empty and run-down. The city has problems with crime. That was about it. I made a couple of phone calls to people who were enthusiastic about Topeka. They exuded positivity and made me want to visit their city. So on a cold Saturday just before Christmas, I drove my family to Topeka. We ate a meal at the Blind Tiger, a local brewpub, then headed across town to the NOTO Arts District. We walked into a light, airy space and talked to the gallery owners. We bought a Christmas ornament. We rambled through three other galleries. We were greeted kindly in each of them and were surprised at their variety. We wondered why we hadn’t come before.

Then we drove around downtown and the neighborhood around the Capitol. Construction barriers were everywhere, and the Capitol was cloaked in scaffolding. Empty storefronts dominated. My husband mentioned that he would like a cup of coffee, but we found no coffee shop open on a Saturday. We saw houses with sagging porches and peeling paint and boarded-up windows. We noted all the state office buildings and wondered where the workers went for lunch. The neighborhood did not look friendly or even safe for walking through, and even if you ventured out, where would you go?

I realized the people who had told me such wonderful things about Topeka had a long, long road ahead.

I called more people. I talked to seasoned leaders, emerging leaders, and volunteers. I heard about efforts and collaboration on everything from sodium reduction to bike trails, programs for young professionals to arts programs, downtown revitalization to library outreach services. I took two more trips to Topeka. On one of those, I took my younger son to the still-new Kansas Children’s Discovery Center, which he loved, and to the Topeka and Shawnee County Library, which was buzzing with patrons. We drove around the College Hill neighborhood and saw new apartments and the lovely Washburn campus.

All of this gave me hope.

Then I talked to Nancy Johnson, executive director of the Community Resources Council, administrator of Heartland Healthy Neighborhoods, and local expert on social services offerings and utilization. Nancy told me some harsh truths about the poverty levels in Topeka and the difficulty of solving those problems. Despite facing these realities head-on, she managed to sound optimistic about continued progress. I have told and retold some of the anecdotes she related. To say that her deep knowledge of the economic divide in Topeka affected me is an understatement.

Nancy Johnson became the personification of Topeka for me. Like the other leaders I interviewed, she believes in what she does every day. She is fully committed and ready to do what it takes to effect change, to weather setbacks, to celebrate progress no matter how incremental. She remembers those who don’t benefit from conventional economic development. She keeps moving forward, no matter what harsh realities she faces.

I came away from this experience with a new respect for Topeka and the people there who looked around and thought, “We can do better.” I look forward to seeing what they accomplish; the rest of Kansas should be watching and learning and drawing inspiration from their efforts. 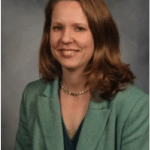 Journal writer Sarah Caldwell Hancock grew up on the High Plains of western Kansas, moved to the San Francisco Bay Area after graduating from Kansas State University, then returned to her home state a decade later. She lives in rural Pottawatomie County with her husband and two sons. She profiled Emporia in the Fall 2012 issue of The Journal.