Kansans find that ‘tis the season to help fight COVID

Love thy God and love thy neighbor as yourself is woven into the fabric of Christian churches.

It’s why, as Christians prepare for one of the most sacred holy days of the year, several Kansans turned to their religious roots when the Kansas Leadership Center helped launch Kansas Beats the Virus to combat the spread of COVID-19. From Episcopalians to Catholics — and beyond — they immediately knew their religious communities had the agency and the power to inspire local solutions. The state of Kansas is a partner in the effort.

“I think we forget that the Bible contains some really specific advice for times like these,” says the Very Rev. Torey Lightcap, at Grace Episcopal Cathedral in Topeka.

When a scribe asks for clarity on the greatest commandment, Mark 12:29-31 gave this account:

Heeding those words, congregants and their leaders have responded with solutions available to any community willing to demonstrate the same pluck and ingenuity of Grace Episcopal and other flocks. Believe it or not, politics provided some lessons.

If at first you don’t succeed …

When Susan Draftz heard KLC was asking Kansans to come up with practical solutions that fit their communities to fight the pandemic, she immediately knew what to do.

Draftz gathered her friends from St. Benedict Catholic Parish in Atchison and became one of thousands of Kansans who stepped up to brainstorm ways to fight the virus. The women didn’t need a one-size-fits all approach or deep thinking from policy wonks to shape their work. They knew what their community needed.

Draftz and several others ambitiously started to call all 950 parishioners to see what they needed. Was it tech support to use Zoom or Telemedicine? Or someone to grab groceries or other goods in a town without the same delivery services available in larger cities? Or did parishioners need counseling to combat loneliness or process grief?

“Funerals aren’t happening,” she says. “So your usual grieving process isn’t happening for some people because they couldn’t go to the funeral.”

But you know what they say about best-laid plans.

Unfazed, the energetic women sent out a letter instead. A KLC grant paid for printing.

The letter was brief and to the point.

Have a Zoom, Telmed or other computer issue? Then Deacon Chuck is your man.

Need groceries or other deliveries? Draftz is your point person.

Seeking counseling? The letter listed names of providers, phone numbers and even a discount for the St. Benedict’s flock.

There was also a challenge to the faithful.

The letter might seem insignificant to some. It’s not a directive issued by elected officials or a request from a health agency. Draftz is a parishioner and didn’t need a title to step up and help others. She and her network know what works for their audience. It followed the same Catholic principles they’ve leaned on for years to make it through rough times. Reach out and love one another.

The letter arrived in mailboxes on Dec. 18.

“Five minutes later I got a call,” she says. “It was somebody who wanted to volunteer to do something. ‘Put me on the list for this’.”

In Topeka, Grace Episcopal’s Lightcap answered the call of Kansas Beats the Virus and then recruited two other congregations – St. Luke’s Episcopal Church in Wamego and St. David’s Episcopal Church in Topeka – to help. The assumption was that churchgoers were already complying with health directives. The clergy wondered how to help congregants feel supported to speak up and encourage others to do the same?

They wrestled with several ideas until a group member threw out one of the most basic of all beliefs – love your neighbor as yourself.

Armed with that idea, they set out to spread the message by creating yard signs (a less intrusive election season approach than phone calls) with that phrase and a similar Facebook profile image.

The peaceful message can be interpreted several ways, Lightcap says, but ultimately it conveys positivity as Kansans face dark days ahead. 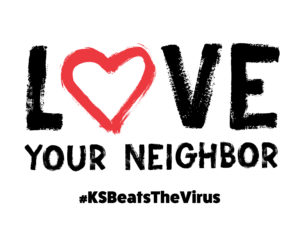 Episcopal churches in Topeka and Wamego are using this yard sign as part of the Kansas Beats the Virus campaign. (Credit: Jennifer Goetz )

“The driving ethic behind all of this is love your neighbor. If you do the things that we’ve been harping on for months and months, you’re fulfilling Jesus’ commandment to love your neighbor as you love yourself,” Lightcap says.

The group is hoping to receive KLC grant funding to hire an artist and a printer, both in Topeka, to complete the work. The artwork is usable in several forms, including a flier for mailing or handing out. The artwork is easily shareable with other Episcopal communities, which might prefer to use a local printer for the work.

“We’re part of a diocese so we have a chance to amplify this from a couple of churches to more than 40 churches in the eastern third of the state of Kansas,” he says.

In a world awash in taboos, Lightcap cannot find anything offensive about allowing scripture to guide congregations through this pandemic. It doesn’t get more basic than loving God and loving thy neighbor.

“What are the absolute and irreducible minimums of faith? That, when you don’t have those things anymore it’s something else,” he says.

Lightcap believes this message will speak to many Kansans.

He also offers this advice for those considering ways to be of use during the pandemic: Stop thinking and do it.

Lightcap had answered the massive challenge of transforming his in-person services to remote and using social media in innovative ways to reach his congregation. But even then, he felt frustrated, passive and reflexive to the headlines; he didn’t really see how he could inspire more action to fight COVID.

“A lot of us aren’t in medicine,” he says. “We don’t know how this thing works. We’re just waiting for someone to come around and put a shot in our arm.”

Compared to transitioning to remote religious services this was a “cake walk.” Others can do it too, he says. It doesn’t take a title in front of your name.

“I would say sit with it until it really unsettles you. And then, in my tradition, I would add, go off and pray about it,” Lightcap says. “But don’t let it stop there. The more you look, the more you will be shown that in fact I do have a role and I can help this situation.”