A life of working across factions 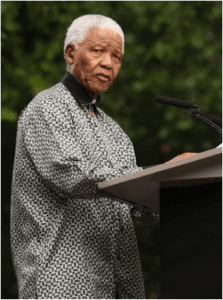 The death of Nelson Mandela yesterday at age 95 sparked a flurry of wonderful remembrances for a man who peacefully liberated his country from Apartheid and became South Africa’s first black president after spending 27 years as a political prisoner. But some of the lasting lessons Mandela can provide us about leadership for the common good seem especially clear in an obituary that appears in The New York Times.

The story is written by the newspaper’s former executive editor, Bill Keller, who served as the bureau chief in South Africa’s capital of Johannesburg in the early 90s, when Mandela participated in negotiations to end white-minority rule and was elected to his first and only term as South Africa’s president.

The government he formed when he finally won the chance was an improbable fusion of races and beliefs, including many of his former oppressors. When he became president, he invited one of his white wardens to the inauguration. Mr. Mandela overcame a personal mistrust bordering on loathing to share both power and a Nobel Peace Prize with the white president who preceded him, F. W. de Klerk.

The obituary recounts the complexities of Mandela’s life as it meanders through its twists and turns. But through it all, what shines through is Mandela’s focus on his purpose, willingness to build bridges across factions and his commitment to bringing a peaceful reconciliation to reality.