What would encourage Kansans to care more about local elections, issues? 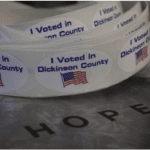 Stickers being given out to voters in Hope, Kansas, during last fall’s general election. (Photo by Jeff Tuttle)

By Jill Sandberg Editor’s note: The spring issue of The Journal, a quarterly publication published by the Kansas Leadership Center, will be released in April. The Journal regularly attempts to take a closer look at key state issues in hopes of helping Kansans think more deeply about them. The following online-only Journal story tackles the ongoing issue of participation in local elections and civic affairs.   On April 2, many Kansans will again exercise their voices by voting in the general election for municipalities and school boards. Topekans will choose a new mayor and decide who will serve in a majority of its council positions next Tuesday. Citizens in Wichita will decide several competitive races for the Wichita City Council and the Wichita USD 259 Board of Education. Residents of cities, suburbs and smaller communities throughout the state will also join in deciding their own representatives in city government, on schools boards and to serve on the boards of trustees at community colleges. But will far too many who could participate, choose not to? According to V. Kay Curtis, director of public affairs and legal publications for the Kansas Secretary of State’s office, traditionally turnout is significantly lower for the local off-cycle elections than for the November general elections. One irony of having lower voter turnout in local elections is that voters have far greater sway in determining who represents them locally. Plus, those local officials serving on city councils or commissions, school board and on community college boards of trustees may be making many of the decisions that affect Kansans most directly. “Local elections are where the most relevant policy decisions by any government are made,” says Chapman Rackaway, associate professor of political science at Fort Hays State University. “Our national media focuses us on Washington, D.C., but federal politics affect less of our daily lives than the local decisions. Those local decisions help determine the quality of our schools, the safety of our neighborhoods, the quality of life in our communities.” But if local elections matter, then why do voters sometimes ignore them? Rackaway believes people are accustomed to voting in November, not in April. The scheduling of local elections has been up for debate in the Kansas Legislature this year. Some in Topeka are backing a proposal to hold city and school board elections in conjunction with state office elections in even-numbered years. Critics of the move, such as the League of Kansas Municipalities, contend that pairing nonpartisan city elections with partisan primaries and general elections “would be inappropriate and confusing for the public.” They also worry that local candidates and elections, as the league has said, “would be lost in the myriad of statewide and federal elections that are conducted at the same time” and diminish the availability of information about local candidates. But Rackaway thinks it would be easier to get people to pay attention to local issues during heated national and state races than when “they are not primed to pay attention to politics.” Regardless of when they are held, though, it appears likely that the outcome of local elections may have an ever-growing impact on the lives of Kansans. Rackaway notes that the direction of state government is moving to a much smaller delivery system, so voting is going to be ever more important at the local level. More of the responsibility for funding schools may shift to local school boards, likely through property taxes. So what do you think? What’s the root of less than ideal participation in local elections? What acts of leadership would it take to encourage more Kansans to vote and more fully engage in local civic affairs each and every day?