Testing will remain crucial even with COVID vaccine rollout

The nation received an early Christmas present when, in mid-December, the U.S. Food and Drug Administration began approving COVID-19 vaccines. But all did not go as planned.

Kansas health officials, for instance, recently were forced to defend their last-in-the-nation vaccination rate ranking, arguing it was simply a matter of slow reporting by local providers. Federal officials have taken heat for a slow rollout.

It could take into the summer to vaccinate everyone who wants a shot, underscoring the need to continue the long-established protocols of mask wearing, social distancing — and testing.

In nearly 1,000 meetings throughout the state in December, a diverse cross section of Kansans devised dozens of creative ways to encourage adherence to the basic public health strategies needed to contain the coronavirus. The effort came through the Kansas Beats the Virus campaign orchestrated by the Kansas Leadership Center and the state of Kansas.

With the assistance of KLC grants, many of these groups plan to encourage people to get tested. That includes the mascot-inspired Swag for Cyclone Strong campaign at Bishop Ward High School in Kansas City, where information about testing will be distributed along with special Cyclone Strong sweatshirts to in fighting the virus.

And if last year proved anything, it’s that persistence and openness to change are keys to success in COVID testing initiatives — whether in the private sector or government.

Lenexa-based MAWD Pathology Group began COVID testing because hospitals in its locale needed rapid testing. Dr. Sam Caughron, the company’s president and CEO, was uniquely positioned to do that because his background is in molecular genetic pathology. MAWD built up capacity to serve the Kansas City area and ramped up even more as healthcare providers outside the immediate area came knocking.

Soon they were also working with skilled nursing facilities, schools and businesses throughout the state who needed to get people back to work as quickly as possible. Working with employers is what Caughron calls: testing for the economic health of a community. 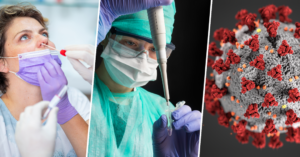 “It gives visibility into the virus,” he said. “You can have people with symptoms, and they are not sure if it’s COVID or something else. Then you have people with no symptoms. But if you test, you can find out if it is lurking there.”

He added: “People who believe they have been exposed can get a test quickly and clear the air of the concern and go back to work.”

They didn’t have access to good testing for months. The health department was taking up to a week to provide results from kits it distributed. That was too long for a facility where just one infection in the tight quarters could spiral out of control. Lakeview Village found another lab, but staff had to drive the samples across town and still didn’t get results for three to five days.

Then Turley heard about MAWD, just a half mile away. MAWD’s turnaround time has literally been a lifesaver for the facility, Turley said.

It helped Lakeview Village quickly segregate COVID patients on a separate floor, and identified several infected workers who were asymptomatic. MAWD also helped Lakeview Village comply with an August federal mandate instituted in response to outbreaks in nursing homes, meaning that it quickly had to ramp up testing for the roughly 500 combined residents and staff members.

Turley said the local health department has been a great partner throughout the pandemic, but it’s overburdened. Along with connecting with MAWD, Lakeview Village also took on its own contact tracing to speed up the process. One important lesson for him was this:

“Don’t wait on the health department or anyone else to be able to beat the clock,” Turley said. “We had to take the initiative, and I’m proud of the team here because we did that. We were fortunate to be doing the legwork and were on top of it early on.”

Learning on the fly has been one hallmark of keeping up with the virus, with the administration of Gov. Laura Kelly serving as another example. By late fall, Kelly and her staff knew they had to take the offensive on testing. 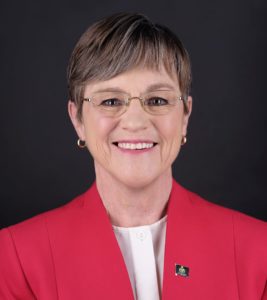 Lack of a clear federal testing plan had left states to determine not only whom to test, but how to do so, said Marci Nielsen, special adviser to the governor. States had to grapple with such things as coordinating personal protective equipment for providers, transportation of tests, communicating results to patients and contact tracing for people testing positive.

Yet as Kansas began to broaden its testing strategies, it became clear there were enough tests, but they weren’t reaching everyone that needed them.

“What we hadn’t done, that many other states have, is screening for broad sectors of the community to determine where COVID-19 exists since 20% to 40% of people who have it have no symptoms,” Nielsen said.

In October, Kelly released her unified testing strategy. It set a goal of administering 1 million tests in 2020.

The state enlisted various organizations in its efforts. Walk-up testing sites proliferated in churches, schools and large venues. A website has helped residents find a testing site, with results generally available withing 48 hours. Currently there are 39 free testing locations listed on the site, which is updated regularly.

Last week, the Kelly administration announced it had it exceeded its goal for last year by administering 1.001 million tests.

In the announcement, Dr. Lee Norman, head of the Department of Health and Environment, cautioned, “We must remain vigilant and continue following proven public health measures as we move into 2021.” Testing, Nielsen added, remains “critically important to control the spread of the virus.”

Kelly pledged that the unified testing strategy would continue full steam ahead.

“Additionally, the groundwork already put in place through our all-of-the-above approach to virus mitigation is, and will continue to be, essential infrastructure that will allow for the quick and efficient distribution of the COVID-19 vaccine.”

Tammy Worth is a healthcare journalist based in Blue Springs, Missouri.