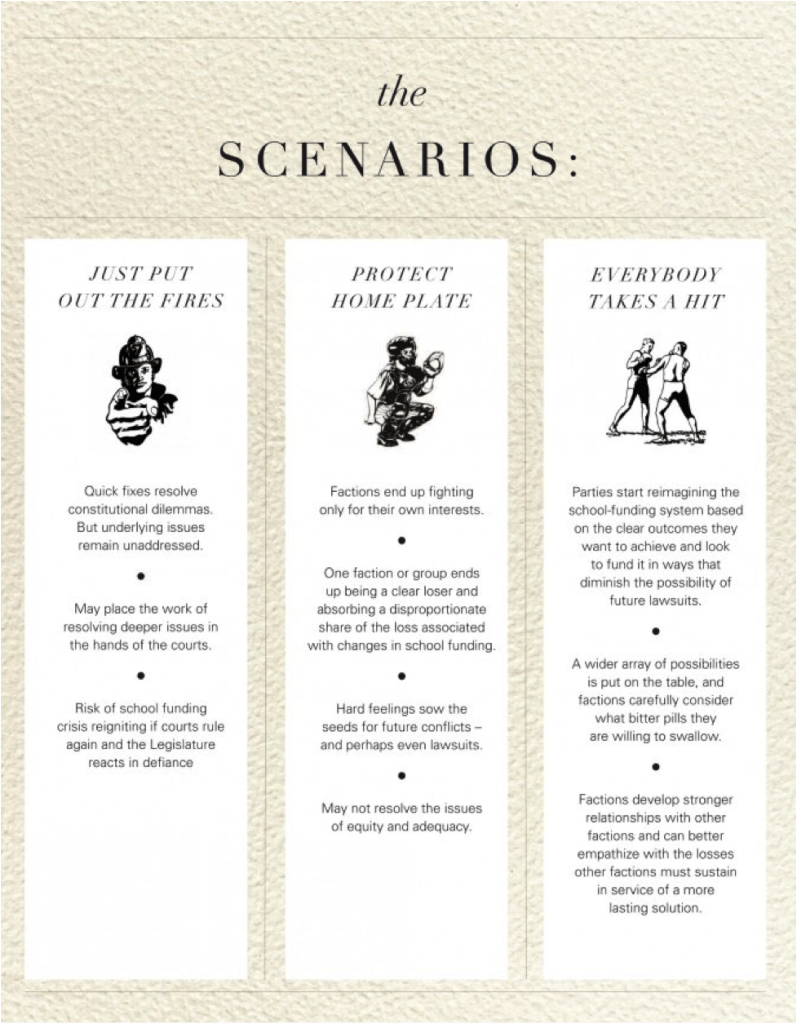 With our scenarios in hand, the 50 of us reunite in the big room and discuss with the head facilitator what we divined. We find that nearly all the groups sketched out very similar possibilities, observing that the court ruling narrowed the possibilities a good bit. While we agree that it is still possible that the courts will decide that schools are adequately funded, we’re not willing to bank on such a decision resolving any controversy for the long haul. And we agree that we can’t simply ignore rulings of the court.

We nickname Scenario No. 1 “Just Put Out the Fires.” The Legislature keeps coming up with quick fixes to resolve the constitutional imbalances found by the court. But the underlying issues — and a real discussion of the kinds of schools Kansas wants and will support — keeps getting kicked aside or down the road a year or two. We risk the possibility of another ruling in the future igniting a constitutional crisis.

A second scenario we end up calling “Protect Home Plate.” Rather than addressing school funding as a problem that we all have a stake in, we protect our home bases by fighting for what’s best for our own people, be it our political party, profession or schools. The end result is an outcome where one faction or group absorbs a disproportionate share of the loss associated with changing the system. It’s a result that sows the seeds for future conflicts.

But there’s another possibility, one we take to calling “Everybody Takes a Hit.” It is appealing for the very fact that, unlike the first two, it might put us on the path to resolving the funding fight in a more lasting way. We step forward, a group of adversaries who disagree on a lot, to begin reimagining the next era of our public education financing system and building it in a way that makes sure schools get the funding they need and the lawsuits go away, if not for good, then at least for decades. The challenge comes in the fact that each faction is likely to take a lump or two along the way to make progress possible.

On one level, it makes perfect sense. No one wins for very long under the current cycle of lawsuits. Plus, it acknowledges that we’ll all need to pitch in to accomplish something, and that we’re all likely going to have to stomach something that isn’t appealing. That last part unnerves all of us.

No one really know what that kind of system looks like. And it opens up all sorts of questions about how we’ll change the existing system and what it will mean for each group in the state.

How will our funding system change? Where will we direct the money? Will some districts lose while others gain? Will there be consolidation? Whose taxes will go up? Whose taxes will go down? Will we cut spending in other areas of government? Will we change how school districts operate? Start more charter schools? Offer vouchers? All of a sudden, someone has emptied a bottle of bitter pills on the table, and some of them will be tough to swallow.

“I don’t know how I could possibly go back home and tell people that we’re pumping more money into government and that we might have to raise taxes,” I confess to Kaye.

“You surely don’t think I want to talk compromise with some of the teachers in my district, do you?” Kaye shoots back. “Some of them don’t want to hear of schools getting a dime less than they got back before the last round of tax cuts, just like your supporters don’t want to hear about tax hikes. And now those teachers feel like the politicians are settling a score and attacking them.”

Still, none of us think we can live with Scenarios Nos. 1 or 2 either. Just putting out the fires or protecting home plate will ultimately only lead us back to where we just left, a place of repetitive conflict and crisis.

After two surprisingly quick days in the Flint Hills, the meeting concludes and we’re preparing to head back to our various towns and jobs. We make plans to meet again in July and reassess where we are then. We haven’t agreed on a firm path to resolving the issue. There’s no real plan yet, at least none that we can hope to agree on.

The one thing that’s changed, though, is I see the world differently than I did before. I haven’t changed my mind about keeping taxes low. Or the need for smaller, more efficient government. Kaye hasn’t flip-flopped on schools needing more money.

But I’m no longer thinking so much that’s it’s “us vs. them.” It’s hard, but I’m trying to see that we all share a common enemy, a less than ideal status quo that will carry on unless we do something different to address it. When it comes to that challenge, I see a wider range of options on the table for making progress than I had realized previously.

I leave thinking more about the long term. About how we fund education appropriately and sustainably and have the state have competitive taxes and be a magnet for jobs. How we can create certainty and consistency for students and employers. And how, back in Topeka and in my district, I will encourage others to work on sharing the pain rather than ignoring the bigger issues or focusing only on protecting their own interests.

And then I tell Kaye, “I don’t know how this story ends. I hope we really can break the cycle together this time. I just don’t know that it’s very realistic.”

“Stranger things have happened,” she replies. “The governor stepped up and invited us all here. And then we actually came. Who’d have thought that possible?”

Editor’s note: This description of a hypothetical process to resolve the Kansas school funding dispute is based on interviews with experts experienced in leadership, civic collaboration, public engagement and conflict resolution. It is informed by the techniques of fiction writing and the concept of transformative scenario planning, as described by writer Adam Kahane in a 2012 book on the subject. A version of this story appears in the Spring 2014 issue of The Journal.