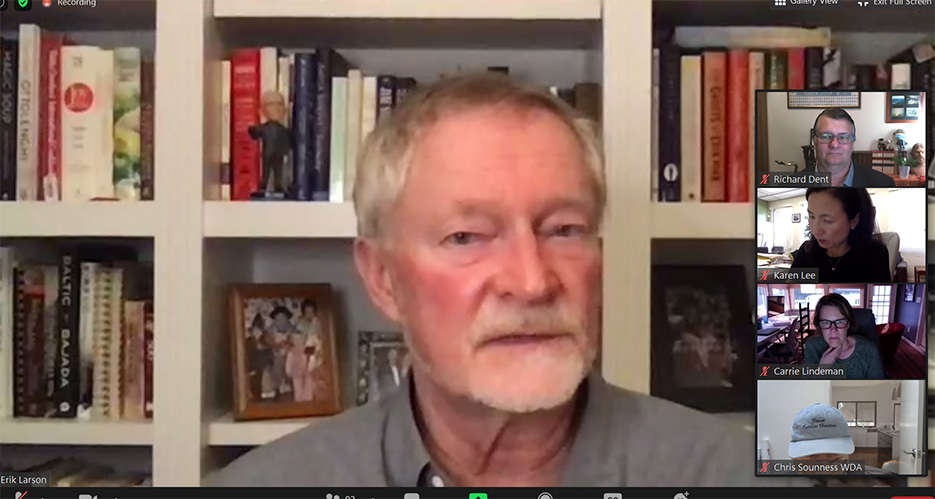 Lessons from Erik Larson’s The Splendid and the Vile: A Saga of Churchill, Family and Defiance During the Blitz

On October 15, 2020, New York Times best-selling author Erik Larson spoke with Ed O’Malley, president and CEO of the Kansas Leadership Center, about leadership and resilience in times of crisis. Larson’s latest book, The Splendid and the Vile, is an intimate chronicle of how Winston Churchill and his inner circle survived the bombing of London in World War II and rallied the British nation in its darkest hour. Spurred by questions from an online audience of more than eighty, O’Malley and Larson elevated examples of how Churchill energized Londoners to stand united against the unprecedented onslaught rained down upon Britain by the Nazis, killing more than 45,000 people in 1940 and 1941.

New to his position as Prime Minister, Churchill used that position of authority to hold the country together in the face of massive death and devastation. As Larson shared stories from his research into Churchill’s character and relationships, we identified twelve leadership moves we intend to try ourselves. See if you think any of these will help you energize other people when times get tough.

12 Leadership Moves You Can Use

1. Unite, don’t divide. Churchill worked across factions and divides to build a shared sense of purpose and national unity. Moreover, he avoided anything that would divide his own people during a critical time. Infighting was a waste of British energy and resources. Everything they had needed to be directed at defeating the enemy across the channel.

2. Elevate common interests. Churchill united people by reminding them that love of country, preservation of family, and survival of Britain mattered above all. He constantly spoke of shared values, aspirations and what they all stood to lose if the Nazis were victorious. 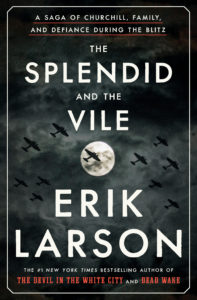 3. Be fearless when it counts. Much to the chagrin of his advisors, Churchill would rush to the roof of 10 Downing Street when the bombs started falling. He did not claim to be unafraid. But he was in charge and needed to see what was happening on his watch. As the city blazed, he faced fear with strength and dignity. In modeling courage, Churchill inspired by example.

4. Make people feel heroic. Heroes are made when ordinary people do extraordinary things. During the darkest moments, Churchill paused repeatedly to acknowledge the efforts of every single man, woman, and child. By speaking to the heroic heart of each Londoner he created in them a sense of power and confidence in their ability to support one another and survive the seemingly endless storm.

5. Acknowledge hardship and inspire confidence. Winston Churchill did not do happy talk. He acknowledged loss, hardship and pain. He spoke to the incredible challenge at hand. Whatever your position, when shepherding people through a crisis, never diminish the danger they face or the pain they feel. But, with Churchill as your role model, couple acknowledgement of loss with an authentic statement of your belief that together they will rise above difficulty – or evil – and overcome.

6. Be present with people who are in pain. Before the dust settled, this prime minister would rush to a bomb site and stand with those who had lost everything. He was not afraid to cry, to reveal his broken heart. He made the purposeful choice to show up for those who looked to him for leadership. 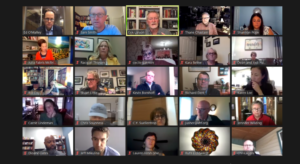 7. Allow people to be moved by your words. Winston Churchill was a natural orator. He understood the power of speaking not only to the mind, but to the heart. The ability of language to focus and form the reality and the response. His words came from deep within him. They landed in the same space in others. You may not consider yourself a natural orator. It will take preparation and practice. Don’t let that stop you from speaking, from your heart, to the ready and aching hearts of those you seek to mobilize.

8. Have close advisors who tell the truth no matter how painful. Churchill did not tolerate those who tried to curry favor by with lies or sugar-coating. Reality was hard enough.

9. Keep advisors close enough for authentic conversation. Winston Churchill was never far from his circle of trusted advisors. He recognized talent and intellect. He knew the urgency of the crisis and made massive demands of his staff. Yet, he also made a point of inviting those advisors to join him at the prime minister’s country retreat. There they could relax, enjoy great food and drink, laugh together and, ultimately talk deeply enough to get at what really mattered.

10. Diminish your opponent in your own mind. Winston Churchill refused to utter aloud the name Adolf Hitler, referring to him only as “that man.” According to biographer Larson, Churchill was protecting his own mental real estate and psychic energy for more important things. Churchill worked hard to make sure Hitler did not grow large enough to overwhelm his native optimism and cloud his better judgment. 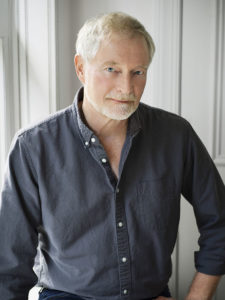 11. Read history. Churchill was a student of history. He knew not only battles and strategy, but the nature of nation states. He understood that there is a long unbroken line of humanity that can teach you how to respond to this current historical moment. Where are the gaps in your understanding of history? What’s on your reading list?

12. Take care of yourself. For Churchill self-care was two baths, heavy drinking, and a dozen cigars per day. That was what he needed to bring his best to the challenge at hand. Regardless of circumstances, those routines were nonnegotiable. They were not luxuries. Like Churchill’s, our times require leadership for the long haul. Know and indulge your self-care non-negotiables.

Some of our constituents have questioned the choice to affirm leadership lessons from an individual who held such imperfect views around imperialism and colonialism, race, ethnicity and gender. Like many historical figures, Winston Churchill falls far short of current and evolving cultural norms around equity, diversity, and inclusion.

Should we view Churchill in our context or in his? We put that question to Erik Larson and his response was this:

“Churchill had the soul of a 19th century imperialist, with all the baggage that went with it. But that doesn’t mean we shouldn’t be allowed to write about other aspects of his life and career. The fact is, in 1940-41, he was indeed the man for the hour—that particular hour. Do you not tell that story because of things he is known to have said about people of color and other cultures? I believe it is inappropriate for historians to apply 2020 standards to events and people of the distant past. But I also believe that if you tell the story properly, laying out the detail as events unfolded, readers will apply those standards on their own.”

At Kansas Leadership Center, the Hawaii Leadership Forum and the Leadership Network, we work from the premise that leadership is an activity, not a position. We know anyone can lead, anytime, anywhere. The corollary then is no one can lead everyone everywhere, all the time. We all get some things right and some things very wrong. We look for clues wherever we may find them. We think we’ve stumbled on some good ones here. Let us know how they work for you.

The evening with Erik Larson was hosted by KLC in collaboration with Watermark Books, sponsors Hawaii Leadership Forum and The Leadership Network and local media sponsor KMUW, Wichita Public Radio.